We found this recipe here, because we had a lot of leftover phyllo dough and some fruit that needed to be used up. We didn’t have all the ingredients and so modified it heavily to get to the recipe you see below. We think it worked out quite well and was much simpler and faster than the original recipe . 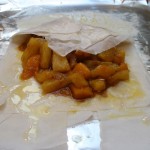 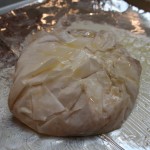 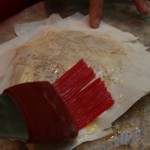 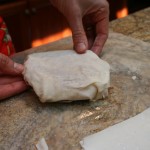 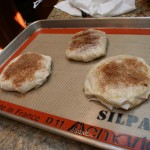 In a pan add water brown sugar, cinnamon and vanilla.
Heat till simmering and the brown sugar is melted.
Add Pineapple and mango, sauté about 3 to 5 min–until soft, not mushy.
Push the fruit to the side of the pan, slowly adding in the cornstarch.
Stir constantly until sauce thickens. Set the mixture aside to cool.

Bake about 12 minutes or until golden brown and puffed up.